After two decades of working on indie games, from launching the first generation of Xbox Live Arcade, WiiWare, and the Nintendo eShop to finally going independent myself, I (Dan Adelman) continue to be surprised—and grateful—that for some people, the hardest part of releasing a hit indie game isn’t the actual making of the game. It’s the business side of games that seems like an insurmountable hurdle to people whose technical and artistic skills are light years beyond my own. 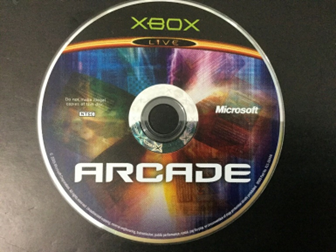 Although it’s not the focus of this blog post, I feel compelled to point out that what Billy Basso has accomplished with Animal Well is (to me) nothing short of miraculous. I’m not a complete slouch. I can write reasonably passable code for simple projects, but my art skills stopped progressing around the time I learned to draw stick figures in kindergarten. Billy created an entirely new game engine completely from scratch with its own proprietary lighting system that gives Animal Well its responsive play controls and distinctive look. Billy had been working on Animal Well as a passion project evenings and weekends for nearly five years before he reached out to me. Despite all of the work he put into making the game and trying to drum up interest on social media, almost no one knew about it. His situation reminded me of another game I worked on: Axiom Verge. When Tom Happ first reached out to me, he had been working on Axiom Verge as a passion project evenings and weekends for nearly five years but still had a ways to go in terms of generating awareness of his masterpiece. 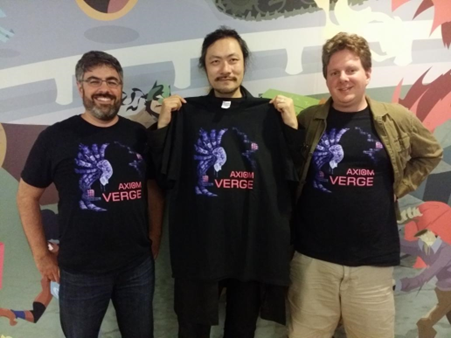 Me and Tom Happ posing with a lucky fan. I believe he said his name was Iga-something

I consider myself a sort of non-publisher publisher. That is, I do all of the business-y stuff that, say, the VP of Publishing at a larger studio might handle so the small indie developers can self-publish and control their own destinies. Although I’m far from being a household name among gamers, I like to think I have a good reputation within the industry itself. And having been on both the platform side and the developer side, I can help bridge the gap between them. There are passionate fans of indie games working at each of the platforms who are actively searching for diamonds in the rough, just as there are great developers who just don’t know how to reach them. There is a signal-to-noise ratio problem that can often come down to the right person at the right place seeing the right game at the right time.

While Billy has been busy plugging away at the game, making new areas to explore and inventing new uses for the various items you find throughout the world, I have been busy showing the game off to the various platform owners, press, and YouTubers. Because we didn’t have a big marketing budget, we had to be scrappy.
Sony took an immediate liking to the game. (I really should emphasize that no matter how good my relationships may be, if the game itself isn’t good, it just won’t get any traction. Working on great games like Animal Well and Axiom Verge makes my job easy.) People like Greg Rice, Shawne Benson, and Tom Gough have gone out of their way to help showcase the game.

Greg helped us get plugged into the Day of the Devs presentation immediately following Summer Games Fest. And that put us on the map. Our Discord community began to gel around the idea of solving the ARG we included in the video. Danny O’Dwyer of Noclip fame called Animal Well his “favorite indie game of the lot that I played” and we even got a shoutout from Dunkey in his Anti-E3 2022 video. If the story of Animal Well were a novel, we would call this foreshadowing.

After E3, we took the show on the road, and showed the game off at Gamescom in Germany and Tokyo Game Show in, you guessed it, Japan. (Ironically, though, the event isn’t held in Tokyo. It’s held in Chiba prefecture in case you ever wanted to annoy your friends with pedantic trivia.) The word was slowly but surely getting out there. Famitsu wrote an article and posted a video about the game. And we got some coverage in some non-gaming outlets like The Guardian. 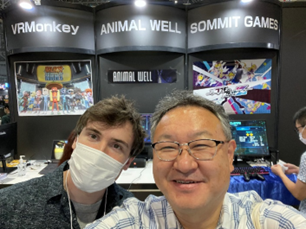 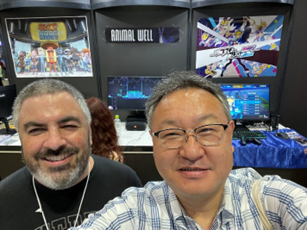 Me and Billy posing with a lucky fan. I believe he said his name was Shoe-something.

After Shuhei Yoshida tweeted his selfies with us, I noticed that Leahbee (Dunkey’s wife and Bigmode cofounder) liked and followed Animal Well. I thanked her for the follow, and as we chatted, she casually mentioned that she and Dunkey were about to announce a new indie game publishing label called Bigmode. We talked about their vision for how their publishing business would work, and what they brought to the table, and it seemed like a great fit all around. As you may have seen, a bit over a week ago Dunkey presented Animal Well in Bigmode's first publishing announcement.

One thing I’m enjoying about this 3-way partnership is that we each bring with us some strengths that offset the others’ weaknesses. At first, Billy’s sole weakness was familiarity with how to bring a game to market—a weakness I came in to help out with. My biggest weakness is that I can’t really reach players directly. I’m always borrowing someone else’s megaphone, whether that’s the PlayStation Blog, Day of the Devs, or Famitsu. Dunkey has earned an audience who respects his opinion and trusts his integrity. (If you’re interested in learning more about Dunkey’s integrity, Google “Dunkey Summer of Arcade”.) As some naysayers were quick to point out, Dunkey and Leah’s biggest weakness is the fact that they’ve never published a game before, but by working together, I can help them navigate that minefield.

We’re now a few months into this working relationship. Dunkey meant it when he said he wanted to roll up his sleeves and play a role in the creation of the games he works on, and the feedback he and Leah have provided has been invaluable. Most importantly, they understand the game and what it’s going for, so there’s never a tension between their suggestions and what Billy has in mind. We’re all working toward the same goal. Here’s a bit from Leah, on Bigmode’s side of things-

“Dan has well covered the origin and start to our publishing relationship, so I'll just offer up some perspective from our end, preceding those events! Last year, we set into motion on bringing the idea of Bigmode to reality, something that was floating around in our heads for a while in various forms. We've always been passionate supporters of games we love, which are so often indies. To us, venturing into indie publishing was a natural evolution of this, and a step further we could go towards supporting games we're excited about. After living as full time Youtubers for the better part of a decade, we of course knew this would be a big change for us personally and professionally, but one that had the potential to make our lives more fulfilling in ways we were missing. Sorry that’s a bit cheesy, but true. One of our deepest hopes was to find collaborators with similar gaming ideologies and creative aspirations. We didn't expect this would be a particularly quick or easy thing to find, so it's with pleasant surprise I say we feel that's just what we've found with Billy and Dan. Working with and getting to know them has been wonderful, and we have so much respect for them both. Paramount to us, we sincerely love Animal Well! We eagerly await the day everyone can enjoy this sparkling gem of a game along with us, it’s truly special! Until then, we'll be treasuring the process, and hope you'll look forward to playing. :)”

Billy’s still working hard on finishing the game, and we’re all in agreement that we’ll be sticking by the mantra of shipping it when it’s ready. We’re also making our plans for future events like PAX East, the first big show in the US where fans will be able to check out the game on their own. We can’t wait to see what you think.
at January 19, 2023 2 comments:
Email ThisBlogThis!Share to TwitterShare to FacebookShare to Pinterest
Labels: animal well, bigmode
Location: Seattle, WA, USA
Newer Posts Older Posts Home
Subscribe to: Posts (Atom)